For millions of school students, the answer may be fresh lettuce and tomatoes, apples and carrots grown by nearby farmers, or, in a few states, fresh lamb or haddock, raised or caught locally.

Farm-to-school programs aim to improve the quality of school lunches and educate students about nutrition and where their food comes from. Programs also provide new markets for growers, which can strengthen local economies. Nearly all states have a farm-to-school program, but at least 10 states enacted laws this year or last boosting theirs, though some measures faced opposition over increased food costs.

When restaurants closed during the pandemic, small farmers, ranchers and fishermen found farm-to-school programs a lifeline.

“COVID hit us pretty hard. It was a major setback,” said Phil Raymond, a first-generation farmer who grows artisan lettuces, microgreens and herbs in Okemos, Michigan, near East Lansing. His regular customers, including restaurants, country clubs and caterers, cut back or stopped ordering altogether.

Raymond, who with three friends founded Blue Mitten Hydroponic Farms in 2016 and is general manager and sales manager, had never thought of selling to schools.

“We didn’t know that was an option. We figured they went with the big distributors,” he said in an interview.

Then he connected with 10 Cents a Meal for Michigan’s Kids and Farms, a state farm-to-school program that matches funding for what schools spend on Michigan-grown fruits, vegetables and legumes with grants up to 10 cents a meal.

“It’s quite a lot of lettuce — more than we expected,” he said.

In addition to Michigan, states that passed legislation this year or in 2021 to expand farm-to-school programs include California, Hawaii, Illinois, Maine, Maryland, Nebraska, Vermont, Virginia and Wyoming, according to the National Farm to School Network. The nonprofit advocates for local food and nutrition education for children and for strengthening family farms and communities.

Hawaii’s new law requires public schools and other state institutions to spend at least 10% of their food dollars locally by 2025, with increases up to at least 50% by 2050. In California, Democratic Gov. Gavin Newsom signed the Buy American Food Act earlier this week, which requires certain schools to buy American foods unless they are at least 25% higher in price than imports.

In California and around the country, farm-to-school programs face several hurdles, including potentially higher food costs, shortages of staff to prepare the local foods and sometimes a lack of available farmers. California state education groups opposed the legislation, saying it would lead to price gouging and unaffordable, increased costs for school districts.

“Well-intentioned but harmful” is how the coalition of education groups described the bill.

“The 10 Cents a Meal program feeds our kids and supports family farmers and growers,” said Michigan Gov. Gretchen Whitmer, a Democrat, when she signed the bill in July. “As we continue our economic jumpstart, we have to make sure everyone has the resources and support they need to succeed.”

Nearly every U.S. state and territory has a farm-to-school program and, while programs vary, each includes at least one of these elements: local food procurement, food education or school gardens, according to the National Farm to School Network.

Some states buy only fresh produce, while others include dairy, meat and grains. Coastal states, such as Maine and Massachusetts, include fish.

While studies have not conclusively shown improved academic achievement or increased fruit and vegetable consumption, research has shown students are more likely to try new foods in a farm-to-school setting.

An added benefit of farm-to-school programs for school food services is reliability.

“We’ve really seen great strides with the program. Especially with supply chain issues, schools that have a relationship with local growers are having an easier time getting their groceries,” Wendy Crowley, the Farm to School Program consultant for the Michigan Department of Education and lead contact for grantees, said in an interview.

Farm-to-school began with a few schools in different states in the late 1990s, then started rolling with the federal Farm to School grant program in 2013. The federal government has delivered nearly $75 million in grants, reaching more than 25 million students in nearly 60,000 schools.

The nation’s schools bought more than $1.2 billion in local foods in the 2018-2019 school year, about 20% of their food budget, and milk accounted for more than half of what they ordered locally. That's according to the 2019 Farm to School Census, the most recent survey conducted by the U.S. Department of Agriculture Food and Nutrition Service.

Challenges to using local foods include cost — local is more expensive — as well as the staff and space needed to prepare the foods and the difficulty finding local suppliers, the survey found.

Maine schools rarely serve fresh fish, even though Maine is a coastal state, because of the cost, said Robin Kerber, coordinator of the state’s Farm and Sea to School program. The high cost also means many children may not see fresh fish on their dinner plates and don’t know whether they like it.

“There are a lot of communities where the parents are fishermen or lobstermen, but the family can’t afford to eat it,” she said in an interview.

After restaurants closed due to the pandemic in 2020, Maine used COVID-19 relief money to help fishermen sell fish. The state created a Local Foods Fund (formerly the Local Produce Fund) to match school districts $1 for every $3 up to $7,500 spent on produce, value-added dairy, protein or minimally processed foods.

The Maine Coast Fishermen’s Association donates excess fresh haddock, hake, monkfish and pollock from their catches to a location in Portland where schools pick up what they need.

Trent Emery, a first-generation produce farmer in Wayne, Maine, 17 miles west of Augusta, is a former teacher who started farming exclusively in 2009, first selling as a CSA (Community Supported Agriculture) provider and to farmers markets.

To operate his 15-acre Emery Farm and greenhouses year-round, he developed relationships with schools and other institutions and now makes daily deliveries.

Through the Farm and Sea to School program, he delivers seasonal produce — beets to watermelons — to four school districts, for about 10% or 15% of his total business.

“I’d like for more schools to buy from our farm and from farmers in general,” he said.

Waste Not? Some States Are Sending Less Food to Landfills

This year, Vermont increased the budget for the state Farm to School and Early Childhood program to $500,000, and the legislature passed a universal school meals law, so that every child in Vermont is entitled to free school meals.

Nebraska established a farm-to-school program in 2021 and added early childhood education to the program this year.

Last year, Wyoming established the Protein Enhancement Project. A pilot project since 2017, the program has a budget of $25,000 to provide grants to schools to match their cost of processing donated beef, bison, lamb, pork and poultry starting in 2023.

California and Hawaii this year moved to require schools and other state agencies to buy local. Hawaii’s Farm to School law now requires the departments of education, health, public safety, defense and the University of Hawaii system to spend at least 10% of their food dollars on local fresh or local value-added, processed, agricultural food by 2025, with increases every five years, until 50% of food purchases by the departments are local by 2050.

In California, the agricultural community has complained for years that schools buy cheap imports of peaches and other fruit for school lunches, even though Buy American is a federal requirement of the National School Lunch Program, and the state has a Buy California law on the books.

California state Sen. Anna Caballero, a Democrat, sponsored the Buy American Food Act bill that will require state schools, community colleges and state universities, other than the University of California, to buy American foods unless they cost 25% more than imports.

“We have an agricultural industry to protect,” she said in an interview. “We saw what happened during the pandemic when shortages occur. This is a national security issue.”

The law will strengthen federal Buy American policy at the state level while protecting farm workers and the agricultural industry, she said.

The measure had bipartisan legislative support, but the education community pushed back. The California School Boards Association, on behalf of the California County Superintendents Educational Services Association and local school districts, had urged Newsom to veto the bill, saying in a news release the 25% was an “unreasonable standard” that would lead to price gouging as schools implement the new universal free school lunch service.

In his statement, Newsom said requests for additional resources will need to be included in the annual budget process.

Caballero said there’s money in the budget to cover the extra cost, though the money is not earmarked, and opponents say it could be used for other school meal costs.

The law says buying American foods is a requirement, but it includes no penalties.

“This is not a gotcha,” Caballero said. “We’re not looking to make life difficult for the school districts.”

Daily update — original reporting on state policy, plus the day's five top reads from around the web.

USE OUR STORIES AND GRAPHICS

All Stateline stories and graphics may be republished in print or online for free. All we ask is that you follow a few rules:

About Stateline
Stateline’s team of veteran journalists provides daily reporting and analysis on trends in state policy.
LEARN MORE
Media Contact
Grace Powell-Harvey
Senior Associate, Communications
202.540.6804
Sign Up
Sign up for our daily update—original reporting on state policy, plus the day's five top reads from around the Web.

Colorado Plan Stands to Benefit Wildlife, Habitat
Posted by Marsha Mercer at 11:27 AM No comments: 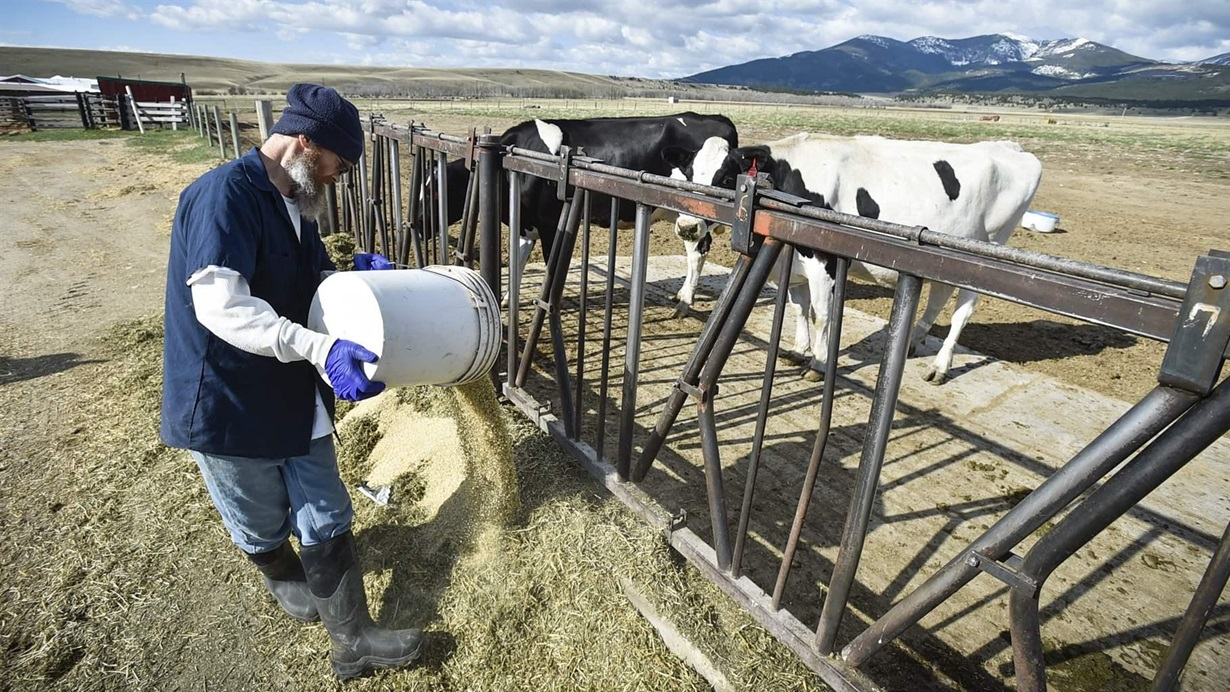 STATELINE STORY September 7, 2022 by Marsha Mercer
Advocates Seek to Make Prison Work Voluntary
The racial reckoning of the past few years has prompted a reevaluation of penal labor as a legacy of slavery.
Read More
Posted by Marsha Mercer at 10:25 AM No comments: