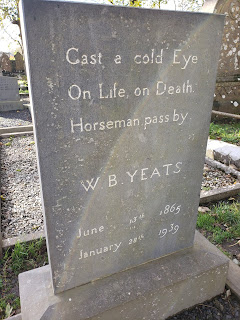 Joe lifted the wire-rimmed eyeglasses from a small wooden desk and held them as tenderly as he would a religious relic.

Joe, a guide at the Yeats Memorial Building in Sligo, Ireland, was giving two American tourists an impromptu tour of an exhibit on poet William Butler Yeats’s family and the people and places that influenced him.

Nobody was around, so Joe let me sit at the desk, briefly.

Since I fell in love with Yeats and James Joyce in college, I’d wanted to visit Ireland. I was thrilled to find my literary lights undimmed, but I never dreamed I’d sit at Yeats’s desk. That was magical.

When the Irish refer to a “full Irish,” they mean a big breakfast, but my traveling partner and I had a full Irish literary and historical feast this month.

For two weeks, traveling independently by train, bus and on foot, we visited many sites dedicated to keeping alive the memories of Irish authors and of patriots who gave their lives for Irish independence. We saw ancient treasures, forts, churches, national parks and stunning scenery – more often than not on dry, sunny days we were assured were “unIrish weather.”

Yeats, who lived from 1865 to 1939, spent much of his boyhood in County Sligo, his mother’s home in the country’s northwest. After the tour and lunch at Lily’s and Lolly’s Café, named for his sisters, we hired a taxi to visit Yeats’s gravesite just outside town.

Yeats wrote his own epitaph -- “Cast a cold Eye on Life, on Death. Horseman, pass by.” -- for his gravestone that faces photogenic Drumcliffe Church and also Benbulben, the dramatic mountain beneath which he wished to be buried.

Our driver, a quiet, older gentleman named Gabriel Doherty, turned off the meter and told us to take our time visiting while he had a cup of tea in the tea shop nearby.

In the stone church, I was warmly greeted by a tall, bearded man in a cassock. He showed me a brass plaque honoring Yeats’s paternal grandfather, who was rector in the 19th century. We talked about the importance of remembering history.

Doherty then kindly offered to take us to Glencar Waterfall, which figures in the Yeats poem, “Stolen Child,” and he went out of his way so we could take pictures of majestic Benbulben.

Ireland celebrates its literary and historical heroes unapologetically and without angst. It’s a stark contrast with the very American urge to examine fully the faults in our past.
After suffering severely under British rule, Ireland ultimately gained independence and became a republic after the bloody Easter Rising of 1916. Rebels seized the General Post Office building in Dublin, and their leader, Patrick Pearse, a poet himself, read the Proclamation of Independence there on Easter Monday. Executed by British firing squad, Pearse became a martyr.

Today, the GPO Museum tells the Easter Rising story poignantly and dramatically. Posters of the proclamation are all over the city, so people never forget.

At the National Library of Ireland, the “Yeats: The Life and Works of William Butler Yeats” exhibition opens in a space where you hear recordings of Yeats himself and others reading his poems before you explore the exhibits.

Yeats and the three other Irish writers who won the Nobel Prize for Literature are among authors celebrated in the Writers Museum. The James Joyce Centre a few blocks away tells the novelist’s story.

“The Dead,” a 1987 movie directed by John Huston based on Joyce’s masterful short story, plays on a loop. In the courtyard is the original door from No. 7 Eccles Street, Leopold Bloom’s address in “Ulysses.” The house was demolished but the door was saved.

On our last full day in Ireland, we lucked into a taxi whose driver attended the same Jesuit high school as Joyce -- Belvedere College -- and is a writer. Driving slowly past the school, he asked if we’d seen the statue of playwright Oscar Wilde in Merrion Square with his quotes. We hadn’t.

“You must,” the driver insisted. “If you aren’t inspired, you aren’t alive.”

He was right, of course. The statue was colorful and the quotes thought-provoking – just like Ireland.