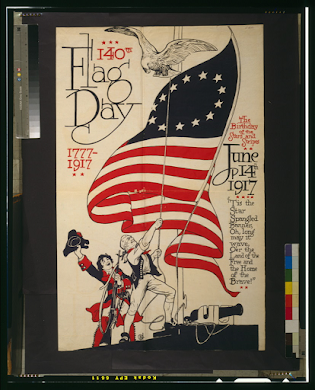 When President Joe Biden addressed U.S. troops Wednesday in the United Kingdom, a gigantic American flag served as a backdrop. Servicemembers in camouflage behind him waved small American flags.

Presidents frequently use the flag to send messages. Biden’s huge flag on his first foreign trip telegraphed to the world that the United States is back as a player on the international stage.

President Donald Trump’s America First policies are history. And, thankfully, so are his antics as patriot in chief. On numerous occasions, Trump literally hugged the flag while mugging for the cameras. In 2020, he embraced and kissed the flag and mouthed the words, “I love you, baby.”

We ask an awful lot of Old Glory.

We proudly send the flag on our adventures on Earth and in space while at home we fight over how to pledge allegiance.

As originally written in 1892, the Pledge of Allegiance said: “I pledge allegiance to my Flag and to the Republic for which it stands: one Nation indivisible, with Liberty and Justice for all.”

The idea 27 years after the Civil War was to unite the country and to evoke the Declaration of Independence.

In 1923, “my flag” was changed to “the flag of the United States” in case immigrants had any doubt which to which flag were pledging.

During the Cold War, President Dwight Eisenhower prodded Congress to add “under God” after “one nation.” That change in 1954 set off lasting legal battles.

Few are neutral about the flag. Some revere the symbol but may or may not live up to its ideals. Some burn the symbol to protest violations of the flag’s ideals, and a few weaponize it.

It was truly sickening to see American flags used to commit violence Jan. 6 when pro-Trump rioters beat police with flags during the insurrection at the U.S. Capitol.

But, sadly, it wasn’t the first time the flag had been used as a weapon.

On April 5, 1976, during busing desegregation protests in Boston, a photo captured the moment a young, white man aimed the sharp point of a flagpole, the American flag attached, at a black man.

The photograph – “The Soiling of Old Glory” by Stanley Forman -- won a Pulitzer Prize for breaking news photography.

We’ve fought over how to treat the flag for decades. Desecrating the flag was a crime until the Supreme Court ruled in Texas v. Johnson in 1989 that flag-burning was Constitutionally protected free speech, overturning anti-desecration laws.

It was President Richard Nixon who started the trend of wearing American flag pins on lapels. He was countering Vietnam War protesters who sewed flags on their shirts and the seats of their jeans. Other politicians, Republicans mostly, soon adopted the lapel pin.

During the 2016 presidential primary campaign, Barack Obama’s failure to wear a flag pin on his lapel caused a mini dust-up. Asked why wasn’t wearing one, Obama said he’d worn a flag pin after 9/11 but found some people who wear them don’t act patriotic. Instead, he said, he would tell people what he believed and show his patriotism that way.

Nice try. Obama’s reasoned response didn’t fly. After that he wore a flag pin on his lapel.

On Monday, we once again will honor the nation’s most iconic symbol on Flag Day. We celebrate on June 14 to commemorate the Continental Congress’s resolution on June 14, 1777:

Resolved, that the Flag of the thirteen United States shall be thirteen stripes, alternate red and white; that the Union be thirteen stars, white on a blue field, representing a new constellation.

How hopeful our forefathers were to see the young country as united under its flag, a new constellation in the sky. That optimism has been tested as the number of stars has grown to 50, but it continues.

On Flag Day, many Americans will fly flags and wear lapel pins. So bring out the stars and the stripes.

Doing so should be an act for us all, not for one group or another. Our democracy may be messier than ever, but the flag belongs to us all, regardless of party or philosophy.

Now more than ever, we need our shared Old Glory.